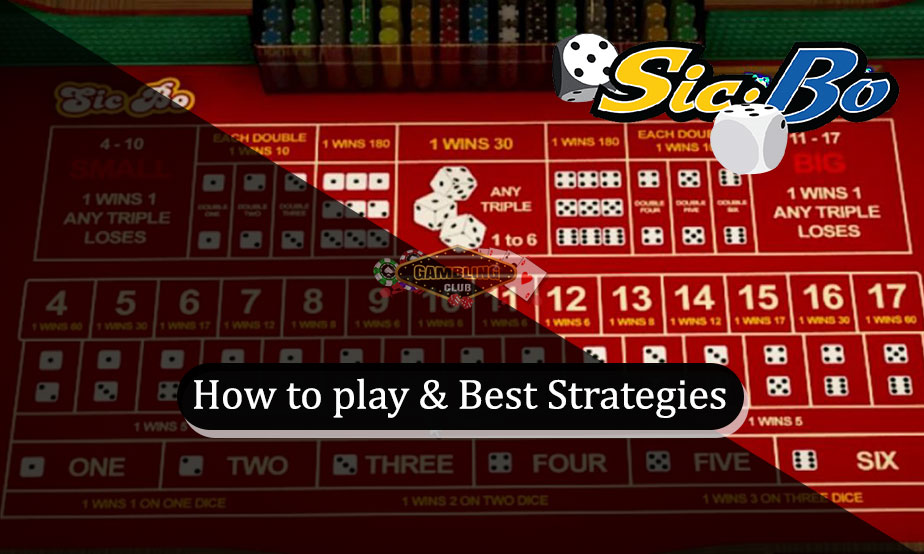 Have you heard about the Sic Bo game? If not, we are not surprised as it is an ancient Chinese game played with three dice. Its table is very similar to the table of Roulette.

This blog will tell you how to play and get the best odds to win this game, as many people don’t know anything about this casino game.

What is Sic Bo Game?

In simple words, Sic Bo is a game of chance played with three dice. The game is originally from China and is occasionally referred to as Dai Siu, Hi-Lo, Tai Sai, or the Big and Small game.

The fun fact is that there are only two Casino games, including dice, and it is one of them.

The game has many variants, including an English version known as Grand Hazard and the US version of Chuch-a-luck.

The game is popular in Asia and Macau Casinos. However, you can play it online.

How to Play Sic Bo Game?

It is a three-dice game developed from an ancient Chinese dice game. It will take an average reader a moment or two to understand the rules and layout of this game.

This game is played on a sic bo table with three dice, online or in a land-based casino. The players must place a wager on one of the many bet options available on the table layout.

After putting them in a plastic cylinder, the dice are given a good shake. In the online version of this game, this is done virtually. Once the dice results are disclosed, some games will be on the table that will be termed winners. If the players bet on these spots, they will be paid according to the odds on the pay table.

Do you know how to play sic bo? If not, here is a step-by-step guide that can help you in becoming a pro in this game:

Firstly, you must place your bets by putting chips on your desired outcomes. You can bet on many outcomes because there is no limit. However, you should avoid betting on results that contradict each other too often.

You could collect your winnings if you placed a winning wager. After that, A player can place new bets and keep playing.

This game has no complicated strategies you need to learn before approaching the table. Once you learn how to read the table, the game is quite easy to play. Some of the basic rules of this game include:

So, the rules are pretty simple- firstly, the player places a bet, then the dealer rolls the dice, and they get paid if they have guessed the correct outcomes.

This game is purely a game of chance, and you cannot take steps to build your Sic Bo odds. However, you can use the following Sic bo strategy:

Some of the betting options for the Sic Bo game include:

The sum of the dice is between 11 and 17. As previously stated, this is one of the most popular bets in Sic bo. This bet excludes any three of a kind, such as three 1s, three 2s, and so on. This bet has a probability of 48.6 percent and pays 1:1.

In a game when the sum of the dice falls between 4 and 10, and like Air Bade, triples are not included in this bet. It has a 48.6% chance of winning with a 1:1 payout.

When a dice sum is a Sic Bo odds number, this bet also doesn’t include triples and pays 1:1. The probability of winning the odd bet is 48.6%.

When a dice sum is an even number, excluding triples, this bet pays 1:1 and has a 48.6% chance of winning.

When a specific number appears on all three dice, this bet has only a 0.46% chance of winning. It pays anywhere from 150:1 to 215:1, which depends on the country you are playing in.

When a specific number appears on at least two of the three dice, the bet has a 7.41% chance of winning and pays between 8:1 and 11:1, depending on the country you are playing in.

Any Triple or All ‘Alls’

This bet is a collection of bets based on the dice sum. These bets are usually listed as a range of numbers, such as 4 or 17. When you place this bet, you expect the dice to result in a sum that falls within that range. The odds and payout for this bet vary depending on your chosen range, and different tables provide different ranges.

With this bet, players can wager on any of the following four-number combinations:

You can win if three of the four numbers appear on the three dice.

If your dice show a combination of three different numbers. The chance of winning this wager is 2.8%.

This is a three-number combination, but instead of three different numbers, it contains two of a kind and a different third number. This wager has a 1.4 percent chance of winning and a payout of 50:1 or 60:1, depending on where you play.

There are some variations of casino games, which include:

This game is played with three dice and is of English origin. In this game, three dice are thrown with a cup or rolled down a chute. It has a lot of inclined planes, causing the dice to tumble randomly as they fall.

In this game, the symbols on the dice are taken into account. This game is similar to Yee Hah Hi.

In this game, each die has the following symbols: a fish, scorpion, gourd, coin, crab, and rooster. There are six bets available, one for each symbol.

This game is similar to Sic bo, in which pictures are used instead of numbers.

Sic bo is one of the less popular online casino games. We base that on how few casinos offer the game or how few of them mention that they offer it on their site.

There are live dealer casino games. It’s not nearly as popular as blackjack or roulette. You’ll find it mostly at casinos that cater to Asian players. A couple of examples include Bodog88, Bet365, and HoGaming.

Aside from that, you should also know that many, if not most, online casinos will not let you play this online game to clear their deposit bonuses. It goes for both Sloto’Cash and Planet 7 Casino.

However, you can play and get cashback. But the casino will raise your playthrough (wager) requirement. For example, at Planet 7, slot players need to wager their cash back 30x before requesting a cash-out.

All other games – mostly sic bo table and video poker games – will need to wager their cash back at 60x before they can ask for a cash-out.

It’s a minor point but necessary to remember, as it can prevent you from collecting your winnings. If you have any questions about this or don’t want to participate in these promotions, we recommend contacting support.

As for mobile sic bo, options are hit and miss. You might find it at a larger casino, like Bet365, but you’ll struggle to find it at a US-facing casino. Especially ones running on RealTime Gaming (RTG), Betsoft, or Rival Gaming software.

There are these game apps. Just keep in mind that you won’t be able to gamble for real money on these apps.

Some of the best sites where you can play Sic Bo online are as follows:

It is a relatively simple game with very few betting options, making it easy to play even for players with no prior gaming experience.

Online is perhaps the safest and most pleasant way to play gambling games. Additionally, playing online minimizes fraud and gives the players the confidence to play without fear of a potentially negative outcome.

A downside to playing Sic Bo online games is the existence of a complex system from the first step to the last step.

According to the withdrawal procedure, every official win must first be converted to balance coins before they can be withdrawn from a bank account.

This gambling game has a major weakness: cheating is nearly impossible to detect.

There is a common cheating scenario during the game where a robot player or agent is posing as a player to join the game. Still, they are fake players who manipulate the game session by lying and hiding behind the robot.

Despite being one of the easiest games to play, Sic bo is also one of the hardest to find online. It is especially hard to find for Americans, and the problem continues offline.

In light of that playing this casino won’t get you many promotions, only very few people will want to play. However, if you like games of chance and can look past those points, you will find this game a straightforward game to learn.

Ans. This game is played on a table with three dice, online or in a land-based casino. The players must place a wager on one of the many bet options available on the table layout.

Ans. The first sic bo winning strategy suggests placing three currency units on eight and two on double 1, 2, and 3. You should also place two units on a combination of 2 and 3. The possible return will be 27 units if eight wins, 22 units If a double bet wins, and 12 units if your Combination bet wins.

Q3. Where is Sic Bo popular?

Ans. Sic Bo game is a popular casino game in Asia and is widely used in casinos in Macao and Hong Kong (for example, dai siu). It is played in the Philippines as hi-lo. Chinese immigrants introduced it to the United States in the early 20th century and can now find it in most American casinos.

Ans. Immigrants from China introduced gambling to the United States in the early 20th century.

Q5. What casinos have Sic Bo?

Ans. Some of the casinos where you can play Sic Bo are as follows:

Ans. Yes, the Venetian is the only casino that offers Sic Bo in Las Vegas.

Ans. Sic Bo Online in India is one of Asia’s most popular dice games and is quickly becoming popular in the online casino industry. While it is widely played in physical casinos in Macau and the Philippines, you don’t have to travel all the way there to play it with real money.

Ans. Sic Bo is always played with three dice. Whether you wish to play online or in land-based casinos does not matter. The table layout, the number of dice used, and the offered bets remain the same. It is a game of chance like all dice-based games.

Q9. Which are the best online casinos for Sic Bo games?

Ans. Sic Bo has been a popular casino game in Asia for a long time, but it never got much attention in the United States or worldwide. Live dealer casinos changed that by making this exciting game more accessible.

Anyone can play real money live casino because learning is straightforward. You must place a wager on which numbers you think the dice will land on.

While this game is gaining popularity worldwide, it is still not as prevalent as casino card games. So, finding the best online live casinos can be hard.

That’s why you should use our recommendations. I did some research for you, so we know you won’t find anywhere better to enjoy this increasingly popular casino dice game.

Ans. It is a simple dice game based on chance. You need to place your chips on a bet box on the table. The dice are shaken, and if the roll’s outcome matches your bet, you win. Sic Bo features a variety of possible bets, each with its payout odds.